A global one-million-euro challenge competition was launched on February 27th  at Helsinki City Hall to answer the question: How can we decarbonise the heating of Helsinki, using as little biomass as possible?

The climate crisis is the most crucial challenge of our time, and cities have a key role in driving the shift to a low-carbon economy.  Finnish government has out ruled the use of coal as heating fuel by 2029. Helsinki is one of the leading cities in the transition towards a sustainable future, with the goal of becoming totally carbon-neutral by 2035. But there is an issue to overcome. Currently, more than half of the city’s heating energy is produced with coal. In order to achieve carbon-neutrality, Helsinki needs radically new solutions to meet city´s heat demand. And we are not alone. To fight climate change, sustainable heating solutions are needed in cities all over the world. Heating not just beyond coal, but also beyond burning biomass.   That is why the Helsinki Energy Challenge is launched. City of Helsinki has allocated one million euro for the awards of the competition.

The final entries are due by end of September 2020. They will be evaluated by an international jury. The winner(s) will be announced in October 2020. 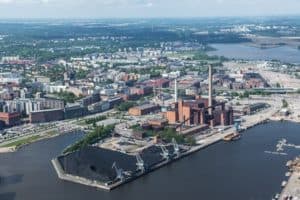 Buildings in Helsinki are mainly heated by coal fired district heating power plants. City will abandon the coal fierd plants by 2029, and is looking for new solutions with the open competition.